Books about it, TV shows about it and knowing it’s a UNESCO World Heritage Site make the Canal du Midi a favourite with those looking for a boating holiday in France. Bathed in year round sunshine, but with the shade of century old plane trees, cypress trees and pine trees that line the waterways, Canal du Midi boat rentals are more popular than ever.

Also known as “Canal Royal du Languedoc”, the picturesque waterways link the many charming and interesting towns and stop-off places. Carcassonne is possibly the most famous and beautiful of them all…

The medieval city of Carcassonne: a brief history

Carcassonne is famous for its hilltop fortifications which were erected pre-Roman period. Even today it is an exceptional example of a medieval fortified city – surrounded by 3km of double walled ramparts and 53 watch towers.

Carcassonne is also of historical importance following the restoration work carried out in the second half of the 19th century by Viollet-le-Duc. This work had a profound influence on the future conservation and restoration of many other historical monuments. 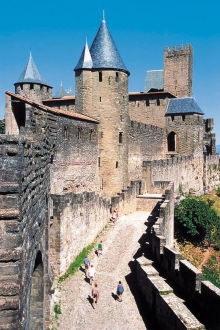 The ramparts that engulf Carcassonne

Carcassonne – a ‘must see’ stop off point!

If you’re going to experience Canal du Midi boat rental then we urge you to include a visit to Carcassonne as part of your itinerary. There are mooring spaces at the port of Carcassonne and then it’s either a 30 minute walk on foot to the city, or for a small cost, you can pick up the shuttle transfer that runs from the port to the centre of the city.

Carcassonne’s historic fortress took a starring role in the blockbuster movie “Robin Hood – Prince of Thieves” and is also said to have been the inspiration to Walt Disney for the castle featured in “Sleeping Beauty”. 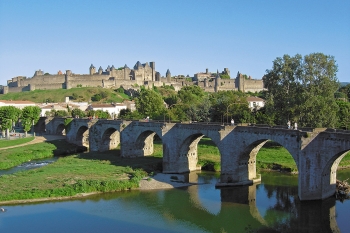 A view of Carcassonne from the Canal du Midi

A city with a magical atmosphere

Enter the city through any of the four entrance gates. The most impressive is the Narbonne Gate which is flanked by two high main towers. The majority of the city can be explored at no cost. The Château Comtal (Count’s Castle) is the only area that has an admission fee – expect to pay around 10 Euros for an adult rate with either guided tours or an audio guide.

The city of Carcassonne is a beautiful place to visit. Stroll through the medieval village – navigating your way through tiny, winding streets where buildings from through the ages (such as the Basilica of Saint-Nazaire) give a reminder of what life would have been like living in the village in the middle ages. Fine detail and character ooze medieval charm at every corner. 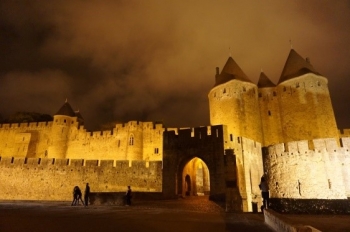 Carcassonne lit up at night

As you’d expect, a city so interesting and beautiful is in popular demand so it can quickly get crowded, especially during high season (June to August). With nearly 3 million tourists visiting Carcassonne every year our advice would be to visit in the evening for a different experience altogether. At night the towers and ramparts become illuminated with an impressive golden glow – the perfect backdrop for an evening stroll.

Carcassonne – perfect for children (and the big kid amongst us!)

Children will be in awe of the medieval horseback battles and jousting shows on display – usually organised twice a day within the city’s walls. Fans of action, horses and the chinking of armour will love the drama.

Also worth a visit is the Torture Museum. It’s small but packed full of medieval torture instruments and stories of their use. Not for the feint hearted!

A full calendar of events and activities run throughout the year but two of the biggest and most well known are the Carcassonne Festival which runs every July and the famous fireworks of the 14th July. 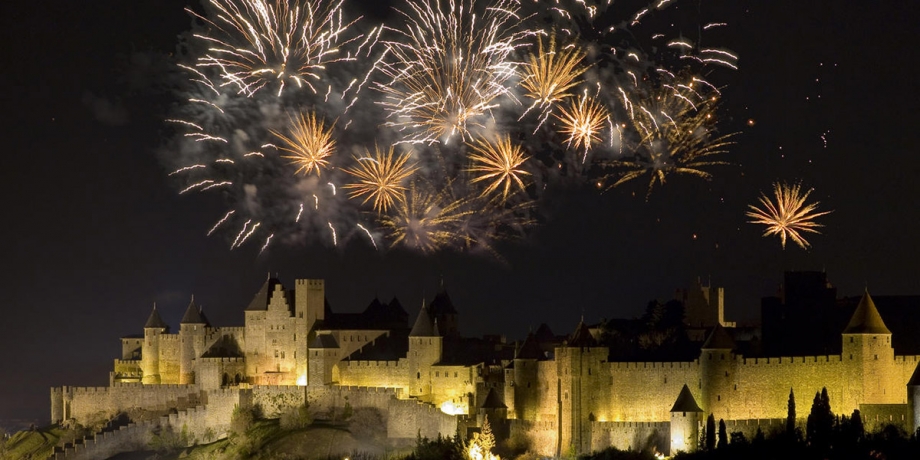 Nicols offer Canal du Midi boat rentals from two bases in the south of France – both which provide easy access to Carcassonne. Choose from the base at Port Lauragais, located 50km west of Carcassonne or alternatively the base at the small village of Somail, located halfway between Carcassonne and Beziers.

Various cruising itineraries are on offer for boating holidays on the Canal du Midi - whether it’s a cruise for a weekend, a short break or longer one week holiday. Visit the Nicols base pages below for more information.