Cruise and cycle on your canal boat holiday

Add a bike or two to your canal boat hire from Nicols and you can enjoy another great way to explore the countryside when you’re not sailing through it. Ready to take ashore whenever you need, a bicycle lets you stretch your legs along towpaths and riverbanks and is a great way to carry back to your boat provisions bought in villages and towns along your route.

When you stop after a few hours of sailing, a bike gives you so much freedom to explore on dry land. Cycling is a great way to enjoy the great outdoors, enjoying the natural surroundings as you journey to reach all the sights and locations you choose to visit in your cruising region.

By combining bike rental with your canal boat hire, you can:

Discover the edge of canals and rivers by bike

Cycling along the towpaths at the edge of the canal or river is a great way to combine the pleasure of boating with that of cycling. Cruises on rivers and canals are particularly suitable for the use of a bicycle: the towpaths are arranged to allow you to explore the area on two wheels.

Anjou is a destination not to be missed for keen cyclists. The Mayenne river is bordered by the La Vélo Francette bike route which was voted as Europe’s best in 2017 - perfect for reaching historic towns and chateaus.

In the Camargue region, the Canal du Rhône à Sète runs along the Mediterranean coast between Aigues-Mortes and Agde and, as a result, the beaches of Palavas-les-Flots or Grau-du-Roi are therefore only a few pedal strokes away!

Built on the old towpaths, all along the canal, the Voie Verte on the Canal du Midi is a 250km long cycle path that takes cyclists on a truly classic ride.

The network of cycle routes created along the waterways in Brittany, makes exploring the Nantes-Brest canal and the Ille-Rance canal equally as enjoyable by water or by bike.

Whether you’re cruising in France, Germany or beyond, there are many cycle paths to help you explore the surroundings - from the lakes of Mecklenburg in Germany to the banks of the Burgundy Canal and throughout the Alsace and Franche-Comté regions.

What our clients say

"Renting a bicycle as well as our canal boat meant we were able to make the most of our holiday. We made numerous stops on the Canal du Midi to explore the picturesque villages that we could not have discovered on foot!"

We can’t recommend just a few destinations for those that wish to enjoy cycling on their holiday. That’s because every destination is great! Wherever you cruise, you can enjoy stopovers for bike rides and take time to discover the surroundings at your own pace. 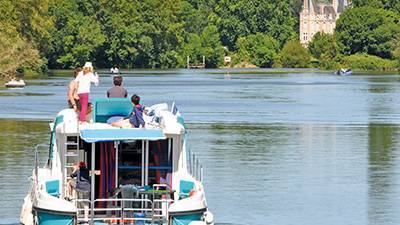 Sample the many pleasures of a canal boating holiday in Anjou! Just 2½ hours from Paris, and in between the Loire region and Brittany... 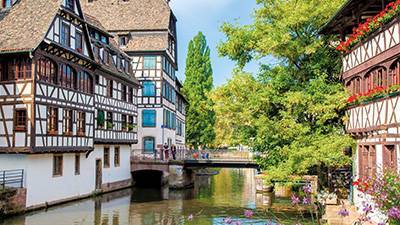 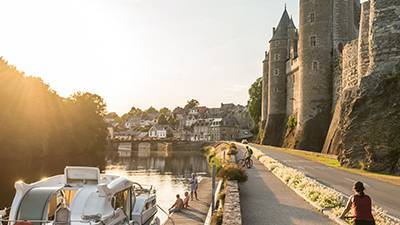 Brittany is well-known for the fun of the seaside... but did you know that Brittany is also a top spot for self drive canal boat hire?