Canal boat holidays in Aquitaine, a lanch rich with history

A boating holiday in the Aquitaine region follows the footsteps (via the waterways!) of the kings of France and pilgrims on the road to Compostelle.

Castles, bastides, fortified cities, cloisters and medieval towns await you as you cruise along the River Baïse. Pass through the country of the Albret family – one of the most powerful in the Aquitaine and the family of King Henry IV.
Those cruising on the Garonne Canal should take time to explore Moissac, awarded World Heritage status by UNESCO as a city of art and history 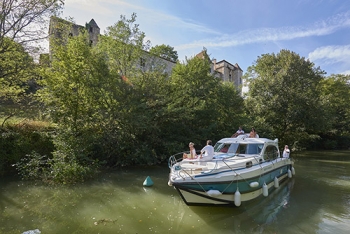 After collecting your Nicols self-drive canal barge from our Buzet-sur-Baïse base your first stop will be Vianne, a medieval town dating back to the 12th century and overlooking the bay. It is from your canal boat that you’ll get the best view of the walls that surround the town – all 1.25km long and 10 metres high of it! On arrival at Vianne take a moment to admire the suspension bridge which has spanned the bay since 1847.

Vianne is one of only a few bastides in the Aquitaine region that has preserved all of its ramparts. Moor your canal boat at the waterside below and then enter the walled enclosure via one of the tower entrances.

History lovers will love the popular city of Nérac. The castle on your right as you arrive held the royal quarters of Henry d’Albret, Henry IV’s grandfather. This ownership is what put Nérac on the map of French royalty and is where Henry IV spent most of his youth.

As you leave the medieval city of Nérac you’ll enjoy a breathtaking view of the Pont Neuf from your canal boat. This impressive bridge structure was built by Henry d’Albret in the 16th century. 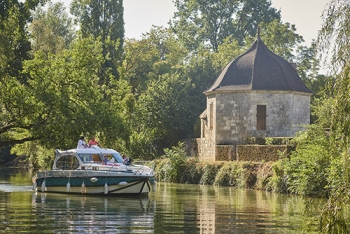 It wasn’t until the 18th century that the River Baïse became navigable. This meant that wines (and other goods) from Armagnac could be easily transported from Condom to Bordeaux, and eventually abroad. Condom, located on the edge of the River Baïse, became the capital of Armagnac and has an abundance of beautiful mansions that show off the economic growth of the city.

Not to be missed in Condom: explore the Saint-Pierre Cathedral, a majestic Gothic building from the 14th and 16th centuries, as well as its spacious cloister and Episcopal palace which today house the Armagnac Museum.

Heading in the direction of Valence-sur-Baïse, we suggest mooring your canal boat at Flaran to discover its magnificent Cistercian abbey. As one of the most well preserved in south west France, it is classified as a historical monument and is a stage on the pilgrimage path of Saint-Jacques-de-Compostelle. It also houses the exceptional ‘Simonov’ collection – hundreds of works of art from the 17th to 20th century period including paintings from Ronda, Monet, Steer and Courbet.

Back on the waterways and just a few kilometres by canal barge you’ll arrive at Valence-sur-Baïse. A feature point here is the 13th century country house that sits high up and overhanging the waterways. From here you can enjoy a bird’s eye view across the valley of the Baïse. Also while here take time to climb the staircase of the towers in the 15th century Saint-Jean-Baptiste church. It’s energy well spent as the view from the rooftop level is perfect for admiring the surrounding Gascon castles. On a clear day you can even see the Pyrénées mountains!

The abbey and cloister of Moissac on the road to Compostelle

Taking a different direction on the Garonne Canal you will meet another important location to the road to Compostelle. Moissac has been acknowledged by UNESCO as a World Heritage city of Art and History and is famous for the Saint-Pierre Abbey. At the entrance is the renowned Romanesque sculpture representing the Last Judgement. Visitors will be impressed by the abbey’s adjacent cloister – built in 1100 and unique due to its 76 different stone carved capitals. 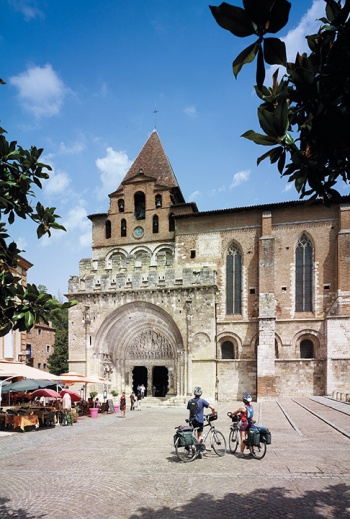 A cruise on the Garonne Canal means you’ll have the opportunity to navigate your self-drive canal boat on two of the longest canal bridges in France.

The first, after leaving the port of Moissac, is the bridge at Cacor. This remarkable feat of architecture is made from Quercy stone and Toulouse brick and was built between 1845 and 1847. At almost 400m long the bridge is also well remembered for its role serving the railways between 1931 and 1938 after the terrible floods on 1930.

The second bridge is found on arrival at Agen. This 539 metre long bridge consists of 23 arches and offers a breathtaking view of the city and the River Garonne. Renting a canal boat for a boating holiday in Aquitaine is a rich experience for those with an interest in history and heritage. The region is also great for other holiday interests as our other blog articles below highlight: 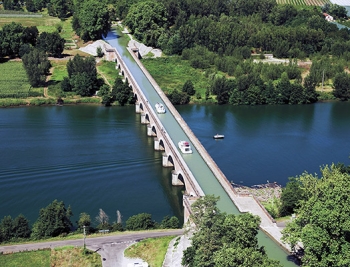