Béziers and the lock ladder of Fonséranes

The nine locks that make up the lock-ladder of Fonséranes near Béziers are the third most visited tourist site in Languedoc-Roussillon, after the city of Carcassonne and the Pont du Gard aqueduct bridge. On average, eight thousand canal boats pass through the locks and over 300,000 visitors come to admire it every year!

This historical but also technological feat has just benefitted from 18 months development work (completed in 2017) to modernise the public areas and make the visitor experience even better.

The locks of Fonseranes – a staircase of water!

A highlight of your boating holiday will be ‘climbing’ this staircase of locks at Fonseranes. It is made up of eight oval shaped (a characteristic of the Canal du Midi) lock chambers with nine pairs of lock doors to pass through. From the lowest point to the highest point your boat will rise 21.5 metres over a distance of 312 metres. This makes it the biggest set of locks in the whole of France, even more so than the famous seven locks of Rogny on the Canal de Briare. 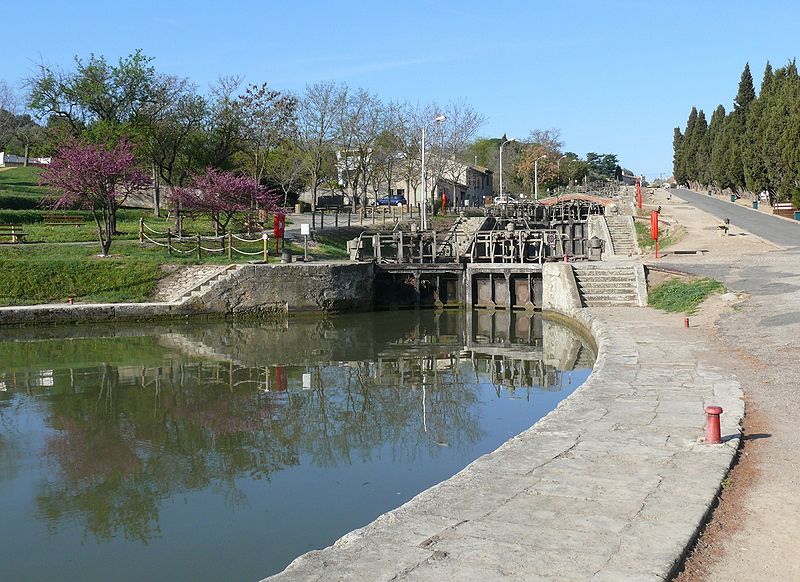 A Riquet masterpiece: this lock staircase is recognised as an extraordinary feat of engineering and dates back to the 16th century. It was created by Pierre-Paul Riquet and his collaborators in tribute to his hometown Béziers and highlights the great technological and economic development experienced by France during these times – where it was probably the most technologically advanced country in the world.

Recent improvements: during 2016/2017 construction work was undertaken to improve and redevelop the site – the idea being to make it a better tourist attraction. The visitor experience is now enhanced with visitors better catered for than ever before and able to enjoy and admire the structure in addition to getting an understanding about the construction and operation of the locks.

A visit to Béziers

Moor your canal boat on the Canal du Midi, near the Fonséranes lock ladder, and then hop on the small tourist train (in summer season) for the short one kilometre journey into the city of Fonséranes.

Béziers is an attractive city sprawling across a hill adjacent to many old stone bridges that cross the River Orb. Over-looking the city is the impressive Saint-Nazaire cathedral. Béziers is also at the centre of the largest wine producing region in France and is as famous for its wines as it is for its bullfights! With its relaxed pace of life and quiet charm visitors can’t help but enjoy complete relaxation in this picture postcard setting. 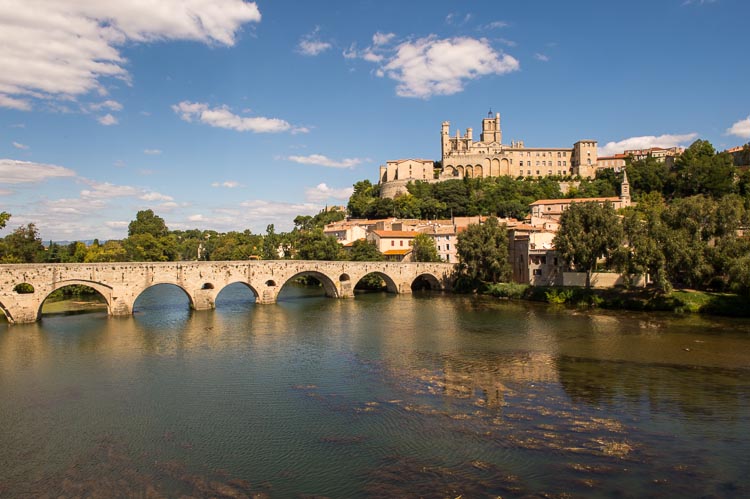 The fortunes of the city have changed dramatically over different points in history. Béziers was a Roman colony in 36 BC and an important location on the road that led from Rome to Madrid. Then in 1209, the city was burned to the ground and the 20,000 inhabitants executed during the Catholic crusade against the Cathars. Béziers then thrived again during the nineteenth century as the city peaked due to the growth of the wine industry of the region.

By far the best way to experience Béziers is to simply stroll through the old streets – admire the architecture, enjoy the shopping and stop in a cafe to watch the world go by. As you work your way around you’ll discover a number of sites and interesting places.

Heading to the city tourist office will also help you make the most your visit. You can pick up a brochure which gives details of four different walks that cover all of the main things to see and do while in Béziers. 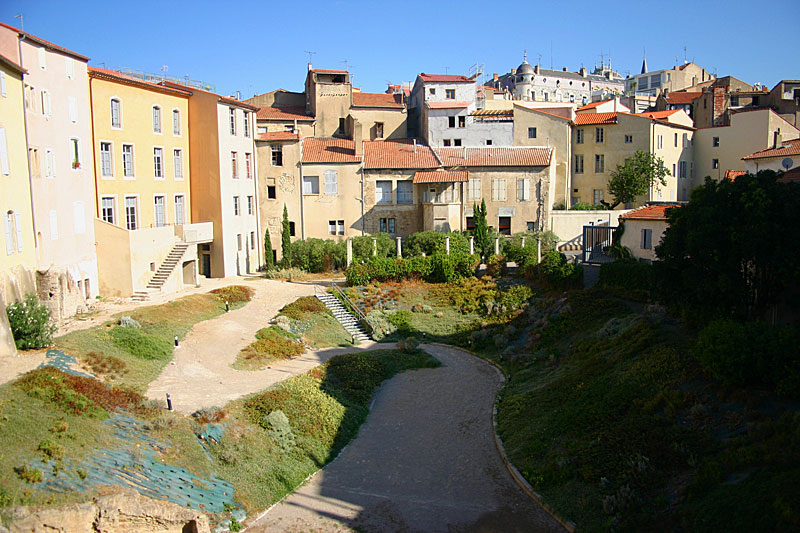 The ‘must sees’ of Béziers

The Museum of Fine Arts, founded in 1859, received in 1934 the legacy of terracotta, marble and bronze sculptures from Jean-Antoine Injalbert. In 1975, drawings and art produced by Jean Moulin was added to the collection. Visitors to the museum can also enjoy works from Hans Holbein, Sébastien Bourdon, Géricault, Vincent Van Gogh, Chaim Soutine, Henri Goetz, Rubens and Delacroix.

Visitors to Béziers will find the flower market located in the Paul Riquet alley every Friday morning. Enjoy a break in one of the many cafes that line the Paul Riquet alley and watch the bustle of the market around you – taking in the fantastic colours and fragrances. This old town area is very pleasant to walk around, with lots of shops dotted along the narrow streets. Also take time to visit the indoor market that is near the cathedral – it’s recently been renovated and although not quite as big as the domestic markets of Narbonne and Nîmes, it is always interesting for giving a real flavour of city life in Béziers.

The Feria de Béziers is without doubt one of the biggest festivals found in the south of France. During the first two weeks of August the city comes alive with spectacular fireworks, street performances and a daily bullfight. There is also an important wine festival in Béziers during the same time as the Feria (fair). If your canal boating holiday in France is in early August and you want to experience a great Languedoc festival then the Feria de Béziers is a must.

Finally, admire a remarkable piece of engineering by taking in the Béziers Canal Bridge which was built in the mid-1850s. Up until then boats had to cross the Orb River, sometimes fighting against the immense flow of water that occurred during flooding. The canal bridge created a new port, replacing the former more sedentary Port Notre-Dame.

Don’t just take our word for it

In his book ‘A little tour in France’, author Henry James recounts a six-week tour he made to provincial towns and commented the following of Béziers...

"My journey from Carcassonne lasted a couple of hours and was performed in darkness - a darkness not so dense, however, but that I was able to make out, as we passed it, the great figure of Béziers, whose ancient roofs and towers, clustered on a goodly hill-top, looked as fantastic as you please. I know not what appearance Béziers may present by day, but by night it has quite the grand air."

Report
ARE YOU LOOKING FOR A SAFE HOLIDAY IDEA?
SELF-DRIVE BOATING HOLIDAYS – THE SOCIALLY DISTANCED SOLUTION! The last two years were difficult. Covid-19 was an unprecedented global health crisis which impacted on nearly all industries, but especially hit the tourism ...
Nicols Backstage
Let’s take care of the environment together!
By hiring a canal boat you are choosing a holiday set at the heart of nature so we know that wildlife and the countryside is important to you. The quality of the environment in which you will be navigating in contributes greatly to the ...
All items
Discover the brochure
Contact us
Call Us