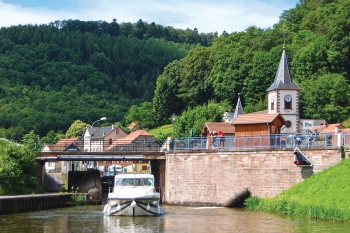 In the immediate aftermath of Britain’s vote to leave the EU, Bobby Cowling went hire-boating in north-eastern France.

Friday 24th June, the day after Britain voted to leave the European Union, my wife Becki and I headed to Strasbourg – the official seat of the European Parliament – to begin a week’s boating in the Alsace region of north-eastern France. While current affairs commentators were busy speculating about the outcome of the shock referendum result, and Boris Johnson was being kept under police guard, our thoughts were a little more self-absorbed – how would the French treat us when they realised we were traîtres anglais!

Arriving at Strasbourg that evening, having taken the Eurostar to Paris and another train onwards from there, the ubiquitous symbol of the city, the European flag, looked suddenly out of date. Thankfully, all thoughts of Brexit quickly disappeared when we began exploring the charming medieval streets and famous sandstone Gothic cathedral. And although our school French undoubtedly betrayed us as English, no one seemed to care.

Sailing through sunflower and wine country on the Canal du Midi with Nicols is an alluring affair, discovers Gill Haynes
« Believe me, my young friend, there is nothing – absolutely nothing – half so much worth doing as simply messing about in ...
Three of the best - France Magazine
Our boating holidays were included in a ‘three of the best’ roundup feature by France Magazine. They chose a short-break in the sunny south of France from the Nicols base at Le Somail on the Canal du Midi.
All items
Discover the brochure
Contact us
Call Us